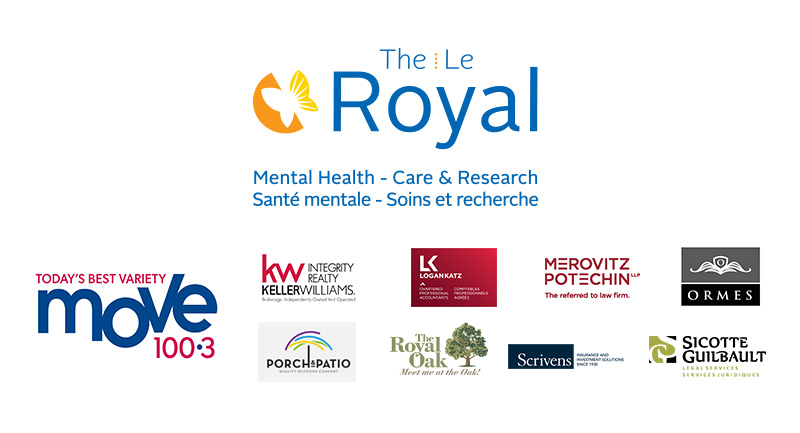 The Royal is one of Canada’s foremost mental health care, teaching, and research hospitals. They combine their specialized mental health care, advocacy, research, and education to transform the lives of people living with complex and treatment-resistant mental illness. The Royal Ottawa Foundation for Mental Health raises funds that help support that work.

From June 3rd to 30th, 2021 we teamed up with The Royal Ottawa Foundation for Mental Health for one of GiveShop’s first Multi-Group Fundraisers. The Royal’s Virtual Garage Sale in benefit of The Royal Ottawa brought together eight sponsoring companies, leveraged a ton of radio play, and featured some impressive prizes. The whole campaign was a shining example of how easy it can be for communities to come together to bring some awareness and raise much-needed funds for a very worthy local cause.

And The Royal Foundation sure knows how to kickoff a campaign! In the almost two weeks leading up to the June 3rd campaign launch, the enthusiastic team at The Royal Foundation jumped into action posting 119 items with a value of $5,512. And they even managed to sell 20 of those items before the campaign officially started. Now that’s how you set yourself up for success!

A huge thank you goes to all the great local companies that came together for this successful campaign. On top of continually promoting the campaign on social, Keller Williams Integrity Realty, Logan Katz CPA, Merovitz Potechin LLP, and Sicotte Guilbault all entered teams that gathered and donated a ton of new and gently used items to go on the GiveShop marketplace. These teams were the lifeblood of the campaign, making sure there was a steady flow of great items getting posted (and even buying some for themselves!). Another great boon for the campaign was having Ormes Furniture as a Prizing Sponsor. Each donor to this campaign was entered into a draw to win one of two $500 gift cards to Ormes Furniture. Out of forty-two unique donors, the two lucky donors drawn were Oliver Saner and Jane Rutherford. Congrats and thanks for supporting local!

And this campaign wouldn’t have reached nearly as far without our fantastic Media Sponsors, Porch and Patio, Scrivens Insurance, and The Royal Oak. Through their support and the very generous broadcast package provided by our Media Partner Move 100FM, the campaign was the star of close to 300 thirty second radio ads that reached all over Ottawa region and beyond. This great coverage really kicked the campaign into high gear and even garnered some attention from local media. Check out this great CTV interview with GiveShop’s then President Mark Farrell!

In the end, The Royal’s Virtual Garage Sale was one of the most successful GiveShop campaigns to date. The Royal Ottawa Foundation for Mental Health had a goal of raising $2,500 and they were able to exceed that with ease. With 219 items listed (valued at over $11K), and 70 items sold, this campaign brought some important focus and funds to an incredible local institution. And the icing on the cake was an additional $1,700 donation from the Keller Williams Integrity Realty team. What a gesture!

Items that did not get snapped up during the VGS remain available for purchase on the marketplace and proceeds continue to flow through to The Royal Ottawa Foundation for Mental Health any time an item is sold.

Here’s what The Royal had to say about the Virtual Garage Sale experience:

“Supporting mental health care and research in our community is so important. As a mother of two and a proud Franco-Ontarienne, I am a passionate advocate for mental health both because I represent so many clients who struggle with mental health in the workplace and as a result of my own first-hand experience with mental illness back in an era when the topic carried an even greater stigma. The GiveShop platform has been a great resource during the pandemic as it has provided The Royal with an avenue to raise funds when many of our traditional fundraising events were put on hold.” –  Danielle Viel, Royal Ottawa Young Professionals Network member.

“We’re so grateful for the support of our community. This pandemic has pushed more people to reach out for help. Funds raised through the GiveShop platform help enable life-changing care we provide to the community. Thank you for bringing hope to more people in need.” – Cynthia Little, Royal Ottawa Foundation Interim President & CEO.

GiveShop is grateful to the VGS champions at The Royal Ottawa Foundation for Mental Health and to the many local companies that came together to rally behind The Royal Ottawa, an outstanding organization and an important Ottawa institution. Here’s to you and to the next campaign!

Thank-you so much to everyone who participated.